HIV stands for Human Immunodeficiency Virus. It damages the cells of the immune system, therefore making the body less able to fight infections and/or diseases.

On the other hand, AIDS stands for Acquired Immune Deficiency Syndrome. It represents potentially life-threatening infections after the body’s immune system has been damaged by HIV.

To make it clearer, HIV can be transmitted to others, but AIDS can’t. 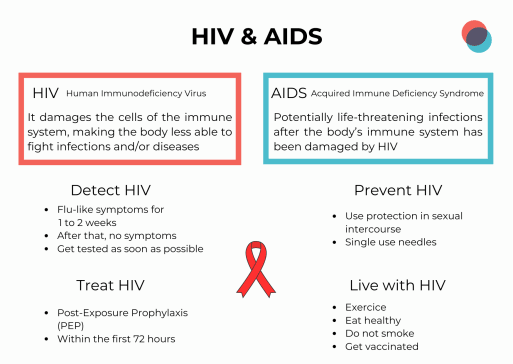 How is it transmitted?

To prevent transmitting HIV, it is important to use condoms while sexual intercourse and not share needles. It is also important to not breastfeed a baby with infected breast milk.

What are the symptoms of HIV?

The first sign is flu-like symptoms 2 to 6 weeks after HIV infection. These symptoms will mostly last 1 to 2 weeks before disappearing. After that, the virus may not cause any other symptoms for years but will still damage the immune system.

This is why it is highly advised to get tested regularly, or when suspicious. HIV tests are available at sexual health clinics and general practitioner surgery.

HIV has no cure to eradicate it, but with early detection and treatments, it is possible to live a normal life without being at risk of AIDS-related illnesses.

Antiretroviral medicines are available to treat HIV. They will stop the virus replication to allow the immune system to repair itself. Because HIV can adapt itself to the medication, a combination of medicines is often prescribed.

Thanks to these daily treatments in the form of tablets, the levels of HIV in the body will be brought to a minimum, making it low enough to not be detectable by tests.

How to live with HIV?

As was said before, it is totally possible to live a normal life with HIV. If treatment is taken, the risks of weakening the immune system and transmitting the virus are lowered to a minimum.

It is also advised to exercise regularly, eat healthily, not smoke, and get all required vaccines to prevent illnesses.

Next Article
Back to menu