Rosalind Franklin - Behind the discovery of DNA structure

It is a woman. Chemist, molecular biologist and chrystallographer responsible for the discovery of the DNA structure.

Born in 1920 in Nothing Hill, Rosalind Franklin achieved an exemplar educational journey. In 1938, she obtained a scolarship and got in Newham College, in Cambridge where she studied chemistry and obtained a PhD in Physics and Chemistry in 1945.

After the war, she went to France and got admitted in the central laboratory of chemical services in 1947 and receives a formation in X ray crystallography.

Drawing on her newly acquired knowledge, she went on to study charcoal. Her work on charcoal porosity were recognized by the scientific community and helped a lot in the identification of its interest for idustry in this time of war.

Back in England, she went to King's College where she strated researches on DNA. She succeeds in getting shots highlighting both conformations of DNA, named A and B. These are the shots that contributed to revealing the double helix structure of the DNA molecule. 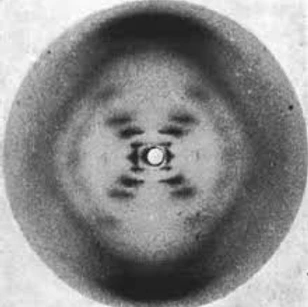 At her departure in 1953 to Birckbeck College, the King's College director ordered that her work stayed in the facility but her researches on DNA were shown to James Watson and Francis Wick, alloing them to rephrase the hypothesis on DNA structure.

Rosalind Franklin will never see the recognition of her contribution and will not have the occasion to see the progress her work has made possible as she died of ovarian cancer at the age of 37, 4 years before her confreres received the Nobel Prize in Medecine for their discovery of the DNA structure.