Everyone can have allergies throughout the course of their lives, they may persist and aggravate, or they may disappear completely. Over the last decades, an increasing appearance of allergies and atopic disorders, such as asthma, dermatitis, and rhinitis, has been observed.

An allergic reaction is a response to the degranulation of basophils and mast cells, which releases mediators that induce sustained inflammation, responsible for the itching symptoms. It is important to note that generally, an allergic reaction concerns only the part of the body that came into direct contact with the allergen. However, in some cases, other parts of the body, not exposed to the allergen, are affected. Then it becomes an anaphylactic reaction. At this stage, the cardiovascular system, airways, and digestive tract are affected, resulting in itching, swelling, stomach aches, nausea, and vomiting.

The different types of allergies

Allergies occur due to hypersensitivity of the immune system to substances in the environment that are normally harmless. There exist 4 different types of hypersensitivities, from Type I to IV. Type I to III are antibody-mediated, meaning that a specific antibody recognizes an allergen, inducing an immune response. Most allergies fall under the type I hypersensitivity category. But for symptoms to show you need a first step called sensitization.

They usually manifest 1 hour after exposure and are known as immediate hypersensitivity or IgE-mediated hypersensitivity. When the antigen binds to IgE antibodies on the mast cells and basophils, it triggers the release of mediators (histamine, prostaglandins, cytokines…) that can increase capillary permeability, vasodilatation, or even cause smooth muscle spasms. Type I hypersensitization is the most common type of allergy.

Immunoglobulin E is a type of antibody that is only found in mammals. It evolved primarily to support the adaptive immune response during parasitic worm infections. But in certain parts of the world, it is not required and can cause more harm than good. Furthermore, IgE-producing plasma cells are enduring and resistant. They are generally located in the bone-marrow or inflammatory tissues, where they cannot easily be targeted by therapeutic intervention.

The formation of an antibody-antigen complex mobilizes cells involved in antibody-dependent cell-mediated cytotoxicity: natural killer cells, eosinophils, and macrophages. This results in cell and tissue damage.

These types of reactions develop 4 to 10 days after exposure to antigen and can become chronic. The inflammation reaction is the result of the antibody-antigen complex accumulating in the vessels or tissue, which induces the secretion of inflammatory mediators.

It’s a T-cell-mediated reaction known as delayed hypersensitivity. Indeed, after the sensitization of the T-cells, during the first exposure, continued exposure and reexposure to the antigen activate the T-cells. By direct toxic effect or through the release of cytokines that activate eosinophils, monocytes, and macrophages, neutrophils, or natural killer cells, T-cells damage organ tissues

Sensitization for type I, II, and III hypersensitivities

An allergic reaction is an inappropriate immune response to a harmless antigen. It requires initial sensitization with a specific antigen. The subsequent exposure to the same antigen can then result in a pathologic reaction mediated by Immunoglobulins (antibodies), mast cells, and basophils.

Allergic sensitization is the outcome of a complex interplay between the allergen and the host in a given environmental context. It is the first step that happens, incognito, in the body. During this period, no symptoms are perceived but, internally, a cascade of reactions occurs. 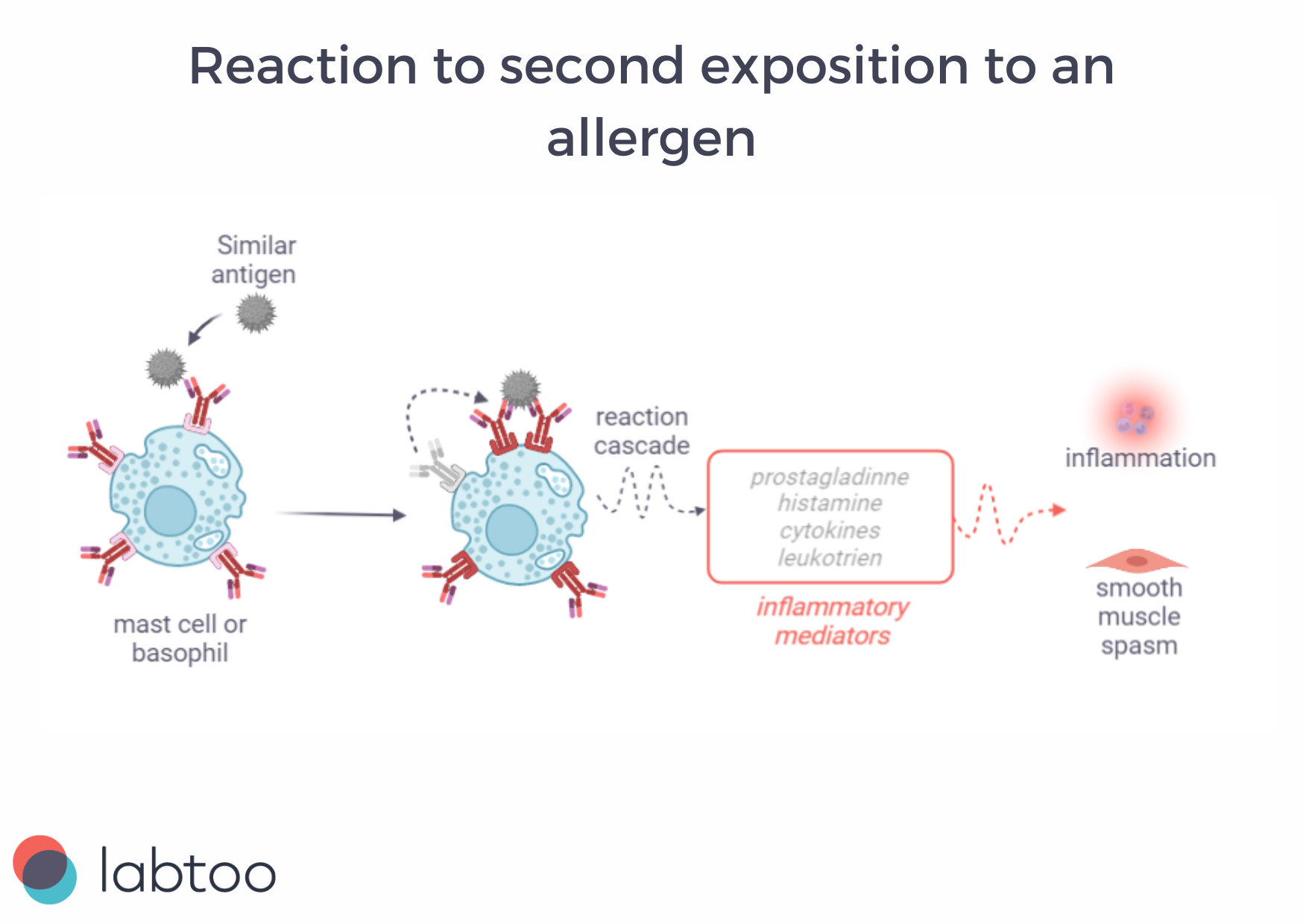 Activation of the innate cell response leads to a series of activations and secretions of various types of cytokines. Their main goal is the conditioning of the dendritic and T cells to modify the nature of their immune response. Therefore, T-cells differentiate into a more complex spectrum of different T-helper cells that together drive or control different aspects of allergic inflammation.

The various stimulating signals coming from dendritic cells will then determine which immunoglobulin B cells produce (IgE. for type I, IgG for type III...)

Allergen-specific immunoglobulins bind to mast cells and basophils, situated in the bloodstream and skin or in the mucosal tissues like the respiratory tract, and gastrointestinal tract.

In the course of the second exposure, mast cells and basophils, with the help of the specific antibodies, recognize the allergen as a threat and trigger an immune response. It’s this response that is accountable for the harsh symptoms.

An atopic disorder refers to the genetic predisposition to developing allergy-related diseases, characterized by an exaggerated immune response to environmental allergens that promotes the production of allergen-specific immunoglobulin E. The most frequent diseases associated with atopy are asthma, dermatitis, food allergies, or rhinitis. Atopic disorders not only affect the patient’s physical and psychological state but may evolve into life-threatening conditions.

Typically, resistance against allergic reactions is built during childhood when exposed to endotoxins and bacterial and viral infections. However, the early administration of antibiotics reduces exposure, which may cause an increase in allergic disorders. Other factors that also contribute to allergy development include chronic allergen exposure and sensitization, diet, and environmental pollutants.